The simple secret to reigniting the passion in your relationship

Parenting is a tough gig at the best of times, let alone when you add the pressures of going to work. It’s important to invest in your relationship daily, and not just save it all up for date night - and that starts with being mindful of your daily interactions with your partner. 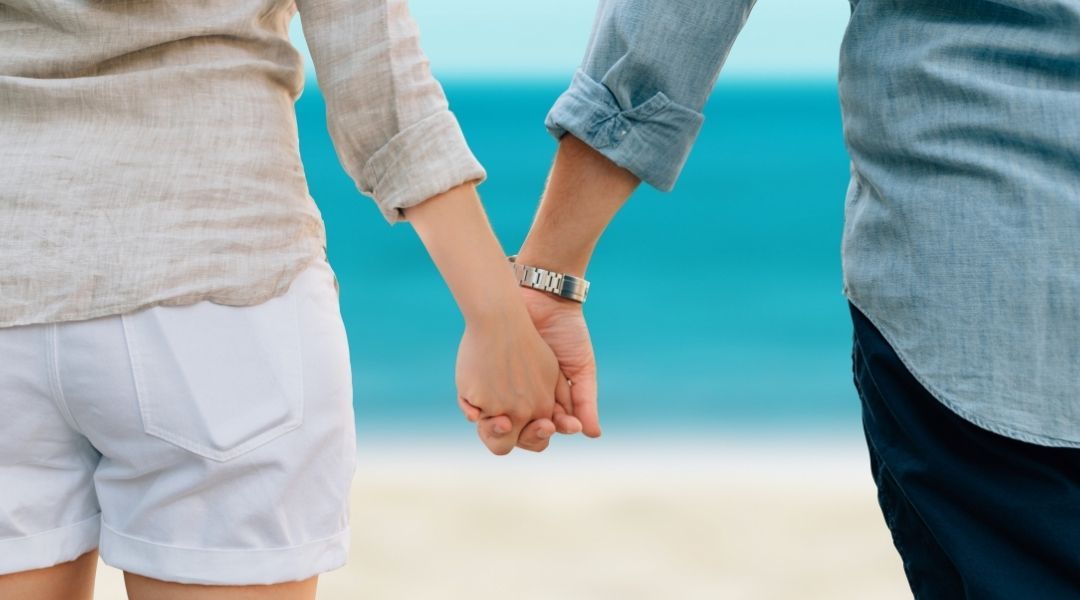 Parenting is a tough gig at the best of times, let alone when you add the pressures of going to work to actually make a living, and trying to maintain a relationship on top of that.

It’s something Western Australian mother Alana Tagliabue and her husband Matt, both 34, have experienced first-hand. Alana is currently “world schooling” their three rambunctious sons - aged eight, three and 18 months (which you can read about on her blog Family Bites Travel) - while Matt finishes training as a doctor in Perth.

“Matt had been working ICU shifts, and we were ships passing in the night. We were metaphorically and figuratively drifting apart. I started to feel a lot of resentment towards Matt’s career. I put the completion of my veterinary studies on hold to be at home,” Alana tells Kidspot.

“Doctors have such high stress and insanely high number of hours to work. We didn’t see each other. We were not on the same page when it came to his working hours. He had no choice in the matter, but it was frustrating. It just wasn’t working, we were bickering a lot and I felt very isolated. We both decided, irrespective of the fortnight, we would have one night, or day, together.”

In the end, the pair decided to hire a babysitter to help them relax and reconnect, and Alana says the opportunity to go out and have some fun together made them “so much happier”.

They now make a point of slipping out for three-or-so kid-free hours at a time, and their favourite pastime is going out and making the most of a long degustation menu.

“It’s easy to slip into mum and dad roles and forget to look after each other. We have been together for 17 years, it’s a long time! We use these dates nights to relax and be together as a couple, and not as parents. We can talk about our hopes, desires, plans, and fears,” she says.

“It’s like pressing a reset button when we I’ve been running around with the kids all day, and he’s exhausted from work. This way we have a lovely break together, and it is something to look forward to. It enables me to be Alana - an individual, and a partner.”

Melbourne-based content director Darren Levin, 37, tells Kidspot that going to the office actually feels like “a bit of a break” compared to the chaos of keeping up with his three energetic daughters. He and his wife both work full-time while raising a seven-year-old and three-year-old twins.

“My wife will get up early to go to work, and I’ll have the kids in the morning, and then she’ll leave work earlier and look after the kids and I’ll stay at the office a bit later,” he says.

“Our schedules don’t really allow for much together time, and sometimes it's just nice to talk to another adult and get out of the kids’ world. It’s nice to have an adult conversation, even though we end up talking about the kids the whole time anyway. For us, we try and get at least one or two nights a week, even if it’s just ducking out for an hour down the road or going for a walk.”

He says they get “a lot of help” from his parents and his wife’s mother.

“It’s incredibly important, otherwise you’re just co-parenting. You really need to keep some romantic spark going, because otherwise you’re pretty much just running a creche at home. It just helps us connect and talk about how we’re going outside the kid world, talk about work and what’s happening in the outside,” he says.

The couple recently used babysitters for the first time on holiday, when they spent 10 days in Queensland. “It went really well, because you know it’s never really a holiday with kids, but we got a sitter up there who was recommended to us and it was a godsend. We could relax just for a day or two by ourselves, like we used to do pre-kids,” he tells Kidspot.

“They were really well-behaved, too. We were pretty shocked at how we got home and they were all sleeping. I think they take advantage of my parents a bit more, when we come home and my parents are looking after them, they’re usually up watching TV,” he laughs. “The other thing is that we didn’t feel as guilty coming home a bit later, because we were paying someone.”

According to Sydney-based psychotherapist Melissa Ferrari, who specialises in relationship counselling, the main things couples fight about are money, children, sex, mess and time.

“I think the juggling act nowadays of trying to manage everything in society and survive financially creates a lot of stress. Everyone wants to do what’s best for their children in terms of education and health and lifestyle, and there’s a lot of pressure,” she tells Kidspot.

She says a “romantic spark” is only possible when both people in the relationship feel safe and secure. In other words, when you know everything is OK between the two of you, you’ll actually have energy to invest into your relationship, your children, and your interests.

However, she warns it’s important to invest in your relationship daily, and not just save it all up for date night - and that starts with being mindful of your daily interactions with your partner.

“I think there’s nothing worse than going on a date night when your daily connections aren’t good. It creates a lot of pressure, because you both know you haven’t been taking care of the relationship,” she says. After all, no-one wants to spend the entire time bickering about who forgot to pay a bill, or was late picking up the kids from their swimming lessons!

“Another thing about date night, particularly over dinner, is you can have eye contact. That can reignite those old feelings, so I think going out for dinner - I don’t tend to advise going out for movies - or doing a new experience and making a memory together, is a really good thing.”

Sign up to Juggle Street and book a babysitter today!

About us
Juggle St for Employers
Blog
FAQs
Contact