The cool side-benefit to hiring a foreign nanny

There are several distinct cognitive advantages for bilingual children including improved executive functioning of the brain, which means they can switch between tasks and solve problems more easily, as well as the ability to learn other languages more easily. 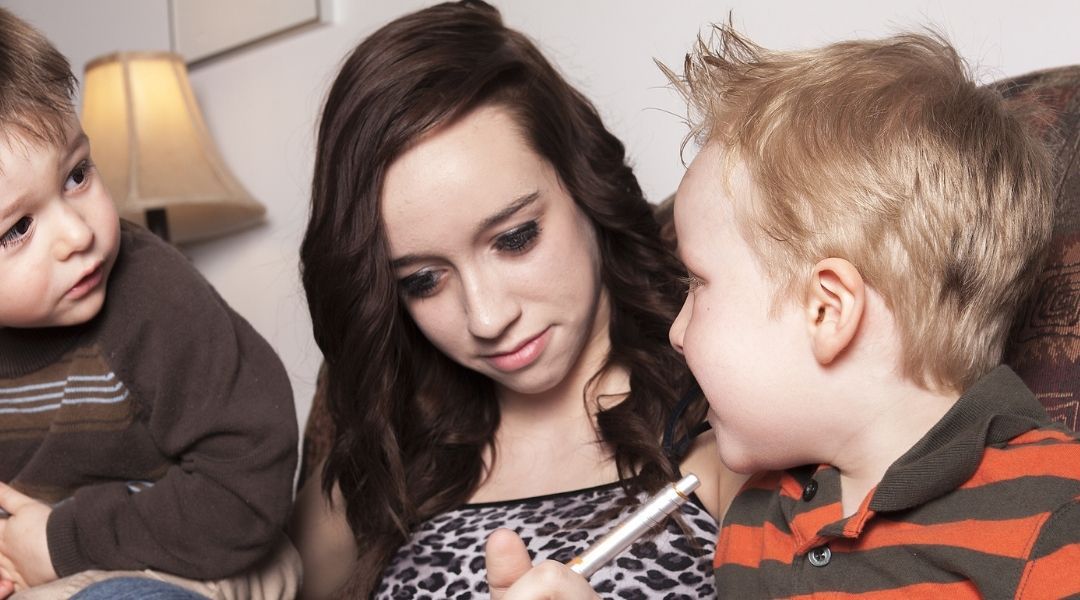 Sydney media executive Georgi Pell, 38, looked online to find someone local who could look after her two daughters, aged five and seven, for three afternoons a week.

Almost immediately, she came across a Spanish university student who had moved to Australia to study journalism, and when she came to meet Georgi’s daughters, they hit it off straight away.

“We were talking at dinner one night, and the girls were like, ‘Mum, I can say from 1-15 in Spanish!’ I said, ‘Oh sure, go for it’. They just rolled it off, each of them, which was pretty impressive. They’d been practising different words in Spanish, which was really awesome,” she tells Kidspot.

“Sometimes they’ll say thank you in Spanish, or say hello. Just the basics, but it’s really nice that she could teach them something as well as babysit at the same time, which I hadn’t anticipated. They get quite excited by it, because they’re learning a new language, and they love it.”

Once the girls went into before and after-school care, they no longer needed the babysitter’s services, but Georgi tells Kidspot they often keep in touch. “She always sends her love to the girls, so it’s a really nice connection they’ve made,” she says.

However, the implications are bigger than just that - their nanny helped develop her daughters’ understanding of the world. “It’s important for them to broaden their horizons, and to understand there’s all these other cultures, and other languages, and other people and traditions,” she says.

Sydney barrister Bridie Nolan, 42, is having a similar experience with a nanny from Brazil. She and her husband both work full-time, and they need a lot of support while looking after their seven children.

She runs her own business, and tells Kidspot she simply couldn’t afford to take time off after giving birth for fear of losing all the hard-won connections she’s forged throughout her career.

“Networking is so important, and whenever I was pregnant and walking around, it was like being on death row. You have to go up to people and say, ‘This is not a death sentence. I am not just going to disappear’. We just made it work,” she says.

Bridie is multilingual, and speaks English, French and Swedish. Like Georgi, she places a lot of value on the fact her nanny has been able to teach her youngest three children another language.

“My kids are learning Portuguese from their nanny. I said it to her from day one, don’t speak any other language except your native tongue, because you’ll just (muck-up) their phonetics. … the best way for them to learn phonetics is through your mother tongue.”

Research shows young children are at a huge advantage when it comes to learning another language. As University of Washington research scientist Naja Ferjan Ramirez explains in The Conversation, “children who experience two languages from birth typically become native speakers of both, while adults often struggle to second language learning and rarely attain native-like fluency”.

She says there are several distinct cognitive advantages for bilingual children including improved executive functioning of the brain, which means they can switch between tasks and solve problems more easily, as well as the ability to learn other languages more easily.

It doesn’t just help infants, either; the benefits carry well into old-age. “The accumulating effect of dual language experience is thought to translate into protective effects against cognitive decline with aging and the onset of Alzheimer’s disease,” she writes.

She says the reason it’s so easy for children is because young brains have a tremendous ability to process different sounds. “All the world’s languages put together comprise about 800 or so sounds. Each language uses only about 40 language sounds, or ‘phonemes’, with distinguish one language from another,” she writes. Babies can tell the difference between every single one of them, and as they grow up, they become specialised in the sounds they hear the most.

Aside from English, the three most widely-spoken languages in the world are Mandarin (898 million speakers), Spanish (437 million) and Arabic (295 million). The Australian government suggests Mandarin, Japanese and Korean are the best languages for kids to learn to get a leg up in their careers, while Arabic, French and Spanish are the best languages to learn if they want to travel.

Undoubtedly the best way to teach your kids another language is to give them opportunities to interact with native speakers. Aside from that, the key is to include plenty of repetition, and make it fun with songs, games and activities to help keep little brains engaged.

Connect with nannies in your area with Juggle Street.